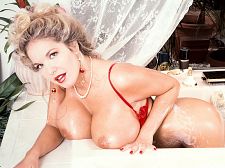 When Dakota Kelly made this video, she was using the stage name Daisy Dukes. (That babe introduces herself by that name.) Even then, Miss Kelly sounds love the published author she would become when that babe says, “To get into a woman’s couch, you must receive into her head.”

Dakota appeared in SCORE magazine a few times (May ’94, September ’98) and on daytime TV talk displays and radio brandishes numerous times. Movie cameras using tape were a long way from the crisp HD shot on memory cards of this day so this tape is showing its age. Dakota is super hawt throughout this montage, discharged in October, 1994.