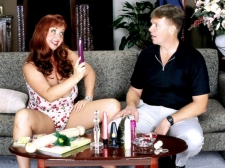 Cherry Brady is a Renaissance Voluptuous Woman. She’s an all-American red-blooded, lusty, naturally Big-Boob redhead with a sharp and smutty sense of humor and great self-confidence. This babe is a wisecracker and a wise woman. This babe likes using wicked words, when appropriate, certainly.

A collector of Voluptuous magazine before she decided to become a Voluptuous glamour model and covergirl herself, Cherry is a man’s lady. It’s like that babe and V-mag were made for each other. That babe not quite appears to be like this babe should have been an adult living in the 1950s judging by her smack in retro dresses, bras, swimsuits and lingerie and in pop culture and decor. That babe would have been a great burlesque star. Fellows would have called Cherry a sexy dame and spanked her round wazoo as this babe passed them by. She’s unashamed about sex and nudity.

“Here’s the thing,” Cherry told a V-mag editor. “The back problems thing is bullshit. 80 percent of Americans have back problems. I just think its demonizing the meatballs. There is no thing incorrect with ’em. Whether u have bigger than average whoppers, little scoops, u should adore them. People should adore ’em. The important things are character, personality and integrity. So you know, the entire breast reduction thing, it just makes me sick. And then the unwanted attention. I used to have a ally that would bitch about bad boyz and blame her wobblers. It’s love the bouncy bosoms will acquire a boy in the door, but if you pick a shitty lad, that’s your fault. Having bosoms is opportunities for gals. If a lady-killer turns out to be a creep, then tell him to get lost. Your boobs are not the problem.”